With the Windows 21H1 (Iron/“Fe”) feature complete deadline looming, the last few Dev Channel builds have had some very interesting changes and additions, which will probably require a few separate blog posts to cover fully. One of those was in a surprising part of the code – object wait dispatching.

All those functions are part of a new and interesting functionality – the ability to wait on an (event) object and to execute a DPC when it becomes signaled. Until now, if a driver wanted to wait on an object it had to do so synchronously – the current thread would be put in a wait state until the object that is waited on was signaled, or the wait timed out (or an APC executed, if the wait was alertable). User mode applications typically perform waits in the same manner, however, since Windows 8, they’ve also have had the ability to perform asynchronous waits through the Thread Pool API. This new functionality associates an I/O Completion Port with a “Wait Packet”, obviating the need to have a waiting thread.

The change in 21H1, through the addition of these APIs, marks a major change for kernel-mode waits by introducing kernel-mode asynchronous waits: a driver can now supply a DPC that will be executed when the event object that is waited on is signaled all while continuing its execution in the meantime.

To use this new capability, a driver must first  initialize a so-called “DPC Event”. To initialize this structure we have the new API ExCreateDpcEvent:

Internally, this allocates a new undocumented structure that I chose to call DPC_WAIT_EVENT:

This API receives a DPC that the caller must have previously initialized with KeInitializeDpc (you can guess who spent a day debugging things by forgetting to do this), and in turn creates an event object and allocates a DPC_WAIT_EVENT structure that is returned to the caller, filling in a pointer to the caller’s DPC, the newly allocated event, and setting the wait block state to WaitBlockInactive.

Then, the driver needs to call the new ExQueueDpcEventWait function, passing in the structure:

As can be seen, this function is very simple – it unpacks the structure and sends the contents to the internal KeRegisterObjectDpc:

You might wonder, like me – doesn’t the “e” in “Ke” stand for “exported”? Was I lied to the whole time? Is this a mistake? Was this a last minute change? Does MS not have any design or code review? I’m as confused as you are.

But before talking about KeRegisterObjectDpc, we need to investigate another small detail. To enable this functionality, the KWAIT_BLOCK structure can now store a KDPC to queue, and the WAIT_TYPE enumeration has a new WaitDpc option:

Now we can look at KeRegisterObjectDpc, which is pretty simple and does the following:

If the wait is no longer needed, the driver should call ExCancelDpcEventWait to remove the wait block from the wait queue. And when the event is not needed it should call ExDeleteDpcEvent to dereference the event and free the opaque DPC_WAIT_EVENT structure.

Meanwhile, the various internal dispatcher functions that take care of signaling an object have been extended to handle the WaitDpc case – instead of unwaiting the thread (WaitAny/WaitAll), or waking up a queue waiter (WaitNotification), a call to KeInsertQueueDpc is now done for the WaitDpc case (since wait satisfaction is done at DISPATCH_LEVEL, the DPC will then immediately execute once KiExitDispatcher is called by one of these functions).

You might have noticed that while the functionality in KeRegisterObjectDpc is generic, all these structures and exported functions  only support an event object. Furthermore, when looking inside ExCreateDpcEvent, we can see that it only creates an event object:

But as KeRegisterObjectDpc suggests, an event is not the only object that can be asynchronously waited on. The usage of KiWaitSatisfyOther suggests that any generic dispatcher object, except for mutexes, which need to handle ownership rules, can be used. Since a driver might need to wait on a process, a thread, a semaphore, or any other object — why are we only allowed to wait on an event here?

The answer in this case is probably that this was not designed to be a generic feature available to all drivers. So far, I could only see one Windows component calling these new functions – Vid.sys (the Hyper-V Virtualization Infrastructure Driver) Digging deeper, it looks like it is using this new capability to implement the new WHvCreateTrigger  API added to the documented Hyper-V Platform API in WinHvPlatform.h. “Triggers” are a new exposed 21H1 functionality to send virtual interrupts to a Hyper-V Partition. The importance of Microsoft’s Azure/Hyper-V platform play is clearly evident here – low level changes to the kernel dispatcher, for the first time in a decade, simply to optimize the performance of virtual machine-related APIs.

As such, since it is only designed to support this one specific case, this feature is built to only wait on an event object. But even with that in mind, the design is a bit funny – ExCreateDpcEvent will create an event object and return it to the caller, which then has to re-open it with ObOpenObjectByPointer to use it in any way, since most wait-related APIs require a HANDLE (as does exposing the object to user-mode, as Vid.sys intends to do). And we can see vid.sys doing exactly that: 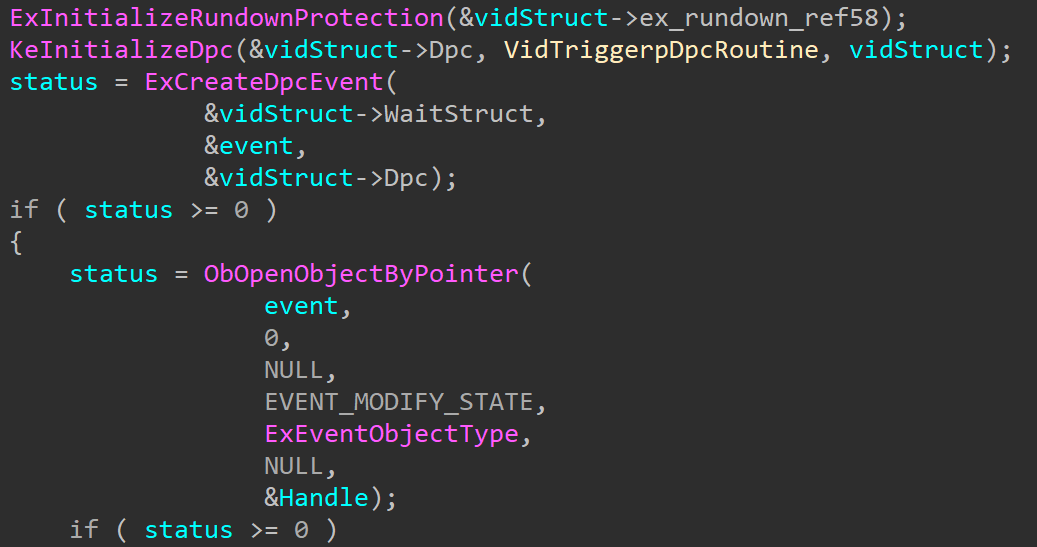 Why not simply expose KeRegisterObjectDpc and let it receive an object pointer that will be waited on, since this function doesn’t care about the object type? Why do we even need a new structure to manage this information? I don’t know. The current implementation doesn’t seem like the most logical one, and it limits the feature significantly, but it is the Microsoft way.

If I had to guess, I would expect to see this feature changing in the future to support more object types as Microsoft internally finds more uses for asynchronous waits in the kernel. I will not be surprised to see an ExQueueDpcEventWaitEx function added soon… and perhaps documenting this API to 3rd parties.

But not all is lost. If you’re willing to bend the rules a little and upset a few people in the OSR forums, you can wait on any non-mutex (dispatcher) object you want, simply by replacing the pointer inside the DPC_WAIT_EVENT structure that is returned back to you. Neither ExQueueDpcEventWait or KeRegisterObjectDpc care about which type of object is being passed in, as long as it’s a legitimate dispatcher object. I’m sure there’s an NT_ASSERT in the checked build, but it’s not like those still exist.

The risk here (as OSR people will gladly tell you) is that the new structure is undocumented and might change with no warning, as are the functions handling it. So, replacing the pointer and hoping that the offset hasn’t changed and that the functions will not be affected by this change is a risky choice that is not recommended in a production environment. Now that I’ve said it, I have no doubt we will see crash dumps caused by AV products attempting to do exactly that, poorly.

To demonstrate how this mechanism works and how it can be used for objects other than events I wrote a small driver that registers a DPC that waits for a process to terminate.

On DriverEntry, this driver initializes a push lock that will be used later. It also registers a process creation callback:

Whenever our CreateProcessNotifyRoutineEx callback is called, it checks if the new process name ends with “cmd.exe”:

If the process is cmd.exe, we will create a DPC_WAIT_EVENT structure that will wait for the process to be signaled, which happens when the process terminates. For the purpose of this PoC I wanted to keep things simple and avoid having to keep track of multiple wait blocks. So only the first cmd.exe process will be waited on and the rest will be ignored.

First, we need to declare some global variables for the important structures, as well as the lock that we initialized on DriverEntry and the DPC routine that will be called when the process terminates:

Then, back in our process creation callback, we will initialize the DPC object and allocate a DPC_WAIT_EVENT structure using KeInitializeDpc and ExCreateDpcEvent. To avoid a race we will use our lock.

ExCreateDpcEvent creates an event object and places a pointer to it in our new DPC_WAIT_EVENT structure. But since we want to wait on a process, we need to replace that event pointer with the pointer to the EPROCESS of the new Cmd.exe process. Then we can go on to queue our wait block for the process:

And that’s it! When the process terminates our DPC routine will be called, and we can choose to do whatever we want there:

The only other thing we need to remember is to clean up after ourselves before unloading, by setting the pointer back to the event (that we saved for that purpose), canceling the wait and deleting the DPC_WAIT_EVENT structure:

Apart from the legitimate uses of asynchronous wait for drivers, this is also a new and stealthy way to wait on all different kinds of objects without using other, more well-known ways that are easy to notice and detect, such as using process callbacks to wait on process termination. 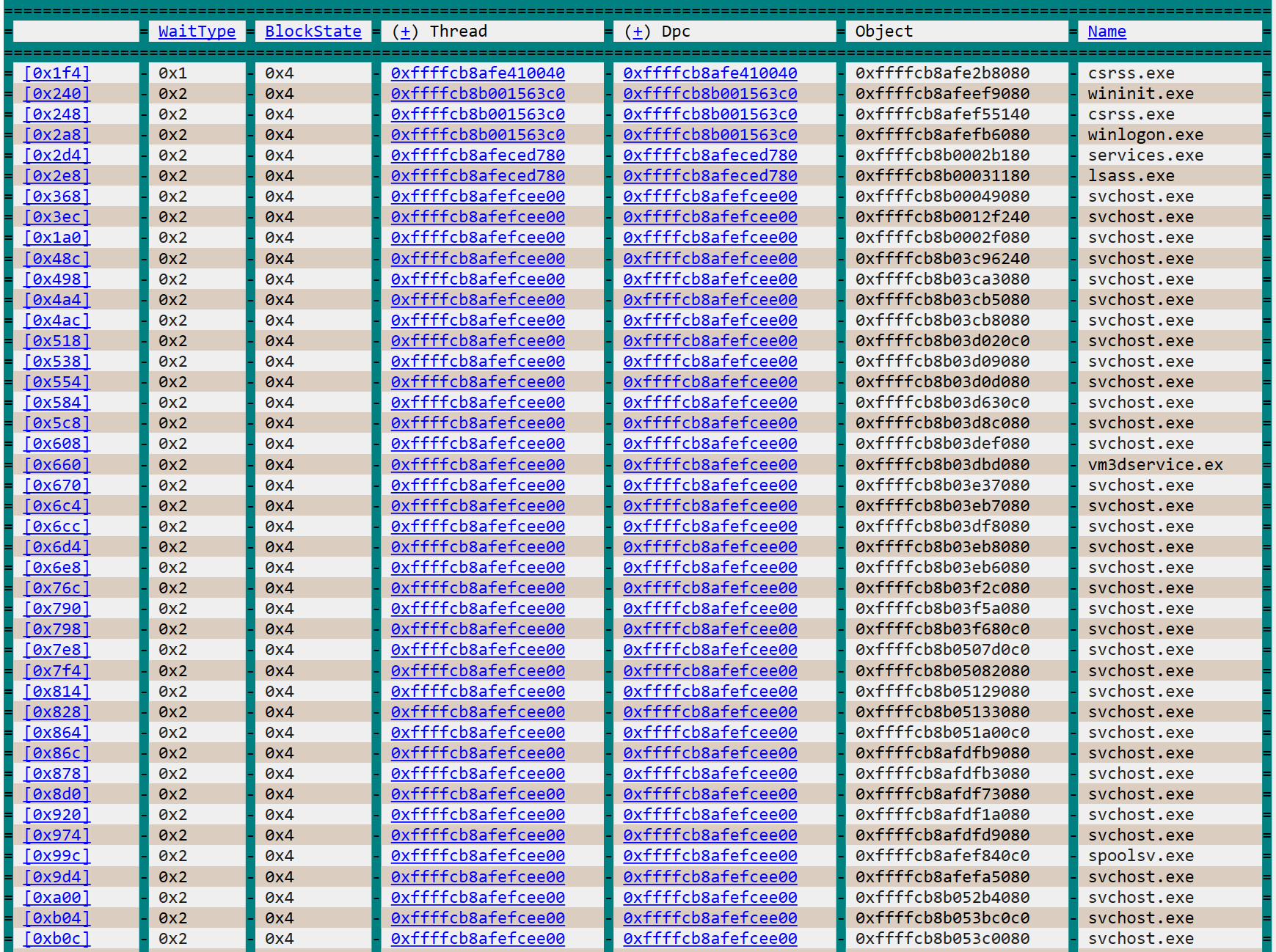 We mostly see here waits of type WaitNotification (2), which is what we expect to see – user-mode threads asynchronously waiting for processes to exit. Now let’s run our driver and run a new query which will only pick processes that have wait blocks with type WaitDpc (4):

Now we only get one result – the cmd.exe process that our driver is waiting on. Now we can dump its whole wait queue and see who is waiting on it. We will also use a little helper function to show us the symbol that the DPC’s DeferredRoutine is pointing to:

Only one wait block is queued for this process and its pointing to our driver!

This analysis process can also be converted to JavaScript to have a bit more control over the presentation of the results, or to C to automatically check the wait queues of different objects (keep in mind it is extremely unsafe to do this at runtime due to the lock synchronization required – using the COM/C++ Debugger API to do forensics on a memory dump or live dump is the preferred way to go).

This new addition to the Windows kernel is exciting since it allows the option of asynchronous waits for drivers, a capability that only existed for user-mode until now. I hope we will see this extended to properly support more object types soon, making this feature generically useful to all drivers in various cases.

The implementation of all the functions discussed in this post can be found here.