I usually write about security features or techniques on Windows. But today’s blog is not directly related to any security topics, other than the usual added risk that any new system call introduces. However, it’s an interesting addition to the I/O world in Windows that could be useful for developers and I thought it would be interesting to look into and write about. All this is to say – if you’re looking for a new exploit or EDR bypass technique, you should save yourselves the time and look at the other posts on this website instead.

For the three of you who are still reading, let’s talk about I/O rings!

I/O ring is a new feature on Windows preview builds. This is the Windows implementation of a ring buffer – a circular buffer, in this case used to queue multiple I/O operations simultaneously, to allow user-mode applications performing a lot of I/O operations to do so in one action instead of transitioning from user to kernel and back for every individual request.

The current implementation of I/O rings only supports read operations and allows queuing up to 0x10000 operations at a time. For every operation the caller will need to supply a handle to the target file, an output buffer, an offset into the file and amount of memory to be read. This is all done in multiple new data structures that will be discussed later. But first, the caller needs to initialize its I/O ring.

Create and Initialize an I/O Ring

To do that, the system supplies a new system call – NtCreateIoRing. This function creates an instance of a new IoRing object type, described here as IORING_OBJECT:

NtCreateIoRing receives one new structure as an input argument – IO_RING_STRUCTV1. This structure contains information about current version, which currently can only be 1, required and advisory flags (both don’t currently support any values other than 0) and the requested size for the submission queue and completion queue.

The function receives this information and does the following things:

After NtCreateIoRing returns successfully, the caller can write its data into the supplied submission queue. The queue will have a queue head, followed by an array of NT_IORING_SQE structures, each representing one requested I/O operation. The header describes which entries should be processed at this time: 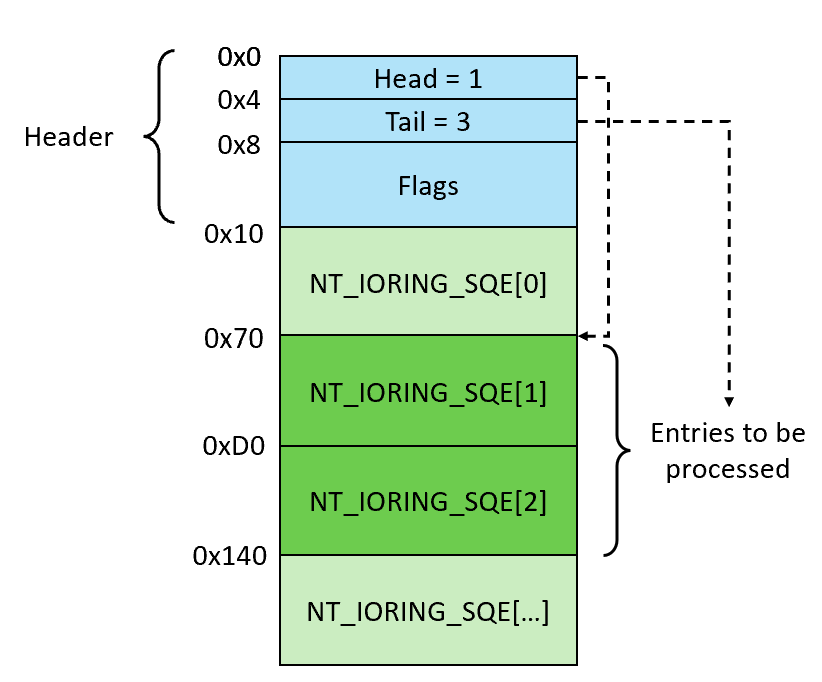 The queue header describes which entries should be processed using the Head and Tail fields. Head specifies the index of the last unprocessed entry, and Tail specifies the index to stop processing at. Tail - Head has to be lower that total number of entries, as well as equal to or highrt than the number of entries that will be requested in the call to NtSubmitIoRing.

There are four possible operation types that can be requested by the caller:

All these options can be a bit confusing so here are illustrations for the 4 different reading scenarios, based on the requested flags:

Flags are 0, using the FileRef field as a file handle and the Buffer field as a pointer to the output buffer: 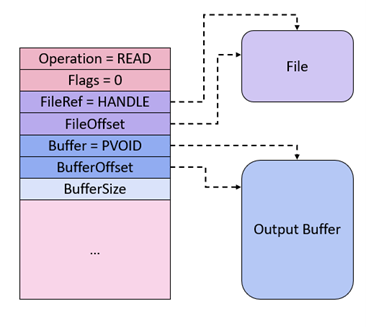 Flag IORING_SQE_PREREGISTERED_FILE (1) is requested, so FileRef is treated as an index into an array of pre-registered file handles and Buffer is a pointer to the output buffer: 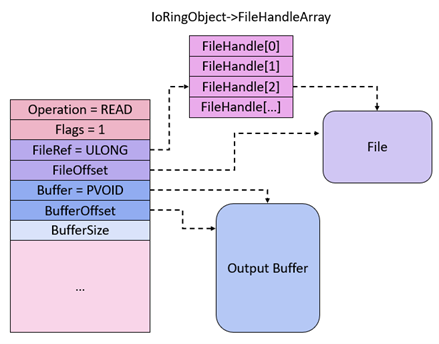 Flag IORING_SQE_PREREGISTERED_BUFFER (2) is requested, so FileRef is a handle to a file and Buffer is treated as an index into an array of pre-registered output buffers: 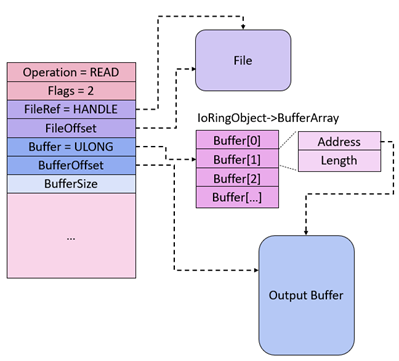 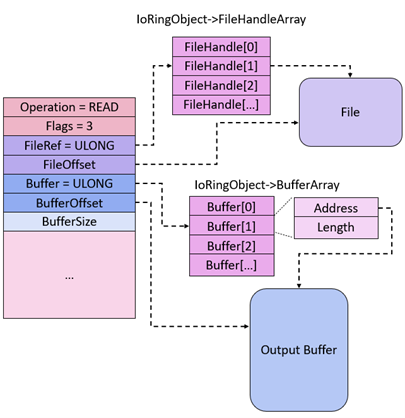 Once the caller set up all its submission queue entries, it can call NtSubmitIoRing to submit its requests to the kernel to get processed according to the requested parameters. Internally, NtSubmitIoRing iterates over all the entries and calls IopProcessIoRingEntry, sending the IoRing object and the current queue entry. The entry gets processed according to the specified OpCode and then calls IopIoRingDispatchComplete to fill in the completion queue. The completion queue, much like the submission queue, begins with a header, containing a Head and a Tail, followed by an array of entries. Each entry is an IORING_CQE structure – it has the UserData value from the submission queue entry and the Status and Information from the IO_STATUS_BLOCK for the operation:

Since multiple entries can be processed, the status returned to the caller will either be an error status indicating a failure to process the entries or the return value of KeWaitForSingleObject. Status codes for individual operations can be found in the completion queue – so don’t confuse receiving a STATUS_SUCCESS code from NtSubmitIoRing with successful read operations!

Like other system calls, those new IoRing functions are not documented and not meant to be used directly. Instead, KernelBase.dll offers convenient wrapper functions that receive easy-to-use arguments and internally handle all the undocumented functions and data structures that need to be sent to the kernel. There are functions to create, query, submit and close the IoRing, as well as helper functions to build queue entries for the four different operations, which were discussed earlier.

CreateIoRing receives information about flags and queue sizes, and internally calls NtCreateIoRing and returns a handle to an IoRing instance:

This new handle type is actually a pointer to an undocumented structure containing the structure returned from NtCreateIoRing and other data needed to manage this IoRing instance:

All the other IoRing functions will receive this handle as their first argument.

After creating an IoRing instance, the application needs to build queue entries for all the requested I/O operations. Since the internal structure of the queues and the queue entry structures are not documented, KernelBase.dll exports helper functions to build those using input data supplied by the caller. There are four functions for this purpose:

Each function create adds a new queue entry to the submission queue with the required opcode and data. Their names make their purposes pretty obvious but lets go over them one by one just for clarity:

The function receives the handle returned by CreateIoRing followed by two pointers to new data structures. Both of these structures have a Kind field, which can be either IORING_REF_RAW, indicating that the supplied value is a raw reference, or IORING_REF_REGISTERED, indicating that the value is an index into a pre-registered array. The second field is a union of a value and an index, in which the file handle or buffer will be supplied.

These two functions create submission queue entries to pre-register file handles and output buffers. Both receive the handle returned from CreateIoRing, the count of pre-registered files/buffers in the array, an array of the handles or buffers to register and UserData.

Just like the other functions, BuildIoRingCancelRequest receives as its first argument the handle that was returned from CreateIoRing. The second argument is again a pointer to an IORING_REQUEST_DATA structure that contains the handle (or index in the file handles array) to the file whose operation should be canceled. The third and fourth arguments are the output buffer and UserData to be placed in the queue entry.

After all queue entries were built with those functions, the queue can be submitted:

The function receives the same handle as the first argument that was used to initialize the IoRing and submission queue. Then it receives the amount of entries to submit, time in milliseconds to wait on the completion of the operations, and a pointer to an output parameter that will receive the number of entries that were submitted.

This API returns information about the current state of the IoRing with a new structure:

This contains the version and flags of the IoRing as well as the current size of the submission and completion queues.

Once all operations on the IoRing are done, it needs be closed using CloseIoRing which receives the handle as its only argument and closes the handle to the IoRing object and frees the memory used for the structure.

So far I couldn’t find anything on the system that makes use of this feature, but once 21H2 is released I’d expect to start seeing I/O-heavy Windows applications start using it, probably mostly in server and azure environments.

So far, no public documentation exists for this new addition to the I/O world in Windows, but hopefully when 21H2 is released later this year we will see all of this officially documented and used by both Windows and 3rd party applications. If used wisely, this could lead to significant performance improvements for applications that have frequent read operations. Like every new feature and system call this could also have unexpected security effects. One bug was already found by hFiref0x, who was the first to publicly mention this feature and managed to crash the system by sending an incorrect parameter to NtCreateIoRing – a bug that was fixed since then. Looking more closely into these functions will likely lead to more such discoveries and interesting side effects of this new mechanism.