This will be a multi-part series of posts describing the internal mechanisms and purpose of Secure Kernel Patch Guard, also known as HyperGuard. This first part will focus on what SKPG is and how it’s being initialized.

In the world of Windows security, PatchGuard is a uniquely undocumented and hardly any “unofficial” documentation. Thus, there are conflicting opinions and rumors about the way it operates and different “PatchGuard bypasses” that get published aren’t very reliable. Still, every few years some helpful PG analysis gets published, shedding some light on this mysterious feature. This blog post is not about PatchGuard so we won’t go into much detail about it, but it discusses a similar and related feature, so some basic knowledge of PatchGuard is needed. Here are a couple of things needed to understand of the rest of the post:

The main weakness of PatchGuard and the reason for all the obscurity around its implementation is the fact that it monitors Ring 0 code and data – from code that runs in Ring 0. There is nothing preventing a rootkit that already gained Ring 0 code execution privileges from patching the code for PatchGuard itself and disabling or bypassing it. The only thing stopping this scenario is PatchGuard’s obscurity and the fact that its code is hard to find and uses a range of obfuscation techniques to make itself hard to analyze and disable.

There is a lot more to say about PatchGuard but, like I mentioned, this is not the topic of the post. So, I’ll skip right to discussing PatchGuard’s newer sibling – HyperGuard, also known as Secure Kernel Patch Guard, or SKPG. This new feature leverages the existence of Hyper-V and VBS to create a new monitoring and protection capability that is similar to PatchGuard but not susceptible to the same weaknesses since it is not running as normal Ring 0 code and cannot be tampered by normal rootkits.

HyperGuard takes advantage of VBS – Virtualization Based Security. This capability that was added in the past few years is made possible by the creation of Hyper-V and Virtual Trust Levels (VTLs). The hypervisor allows creating a system where most things run in VTL0, but some, more privileged things, run in higher VTLs (currently the only one implemented is VTL1) where they are not accessible to normal processes regardless of their privilege level – including VTL0 kernel code. Put simply, no VTL0 code can interact with memory in VTL1 in any way.

Having memory that cannot be tampered with even from normal kernel code allows for many new security features, some of which I’ve written about in the past and others are documented in other blogs, conference talks and official Microsoft documentation. A few examples include KCFG, HVCI and KDP.

This is also what allows Microsoft to implement HyperGuard – a feature similar to PatchGuard that can’t be tampered with even by malicious code that managed to elevate itself to run in the kernel. For this reason, HyperGuard doesn’t need to hide or obfuscate itself in any way, and it’s so much easier to analyze using static analysis tools.

The VTL1 kernel, also known as the secure kernel, is managed through SecureKernel.exe. This is also the binary where HyperGuard is implemented. If we open securekernel.exe in IDA we can easily find all the code implementing HyperGuard, which all uses the prefix Skpg: 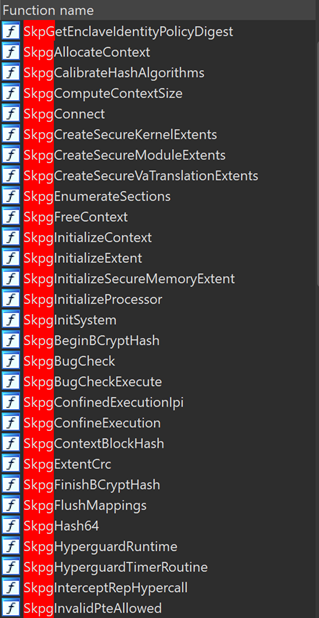 This series will cover some of those functions, starting from the first ones being called during boot: SkpgInitSystem:

HyperGuard initialization mostly happens during the normal kernel’s Phase 1 initialization, but requires multiple steps. The first step starts with a secure call where SKSERVICE=SECURESERVICE_PHASE3_INIT. This leads to SkInitSystem which will initialize SKCI (Secure Kernel Code Integrity) and call into SkpgInitSystem. This function sets up the basic components of SKPG – its callback, timer, extension table and intercept functions, all of which I’ll discuss in more detail later in this series. At this point SKPG is not fully initialized – that only happens later in response to another request from the normal kernel. For now, only a few SKPG globals are being set:

Some interesting components to notice at this stage are:

After initializing all the global variables, the function returns and the rest of the secure kernel initialization continues. For now, the timer is not scheduled and HyperGuard is effectively “dormant”. HyperGuard is only fully “activated” later – through a call to SkpgConnect.

There are three ways to call SkpgConnect and all start from a call by the normal kernel:

The most interesting HyperGuard activation path is through PatchGuard. This SKPG activation path, like all others, begins with a secure call. This secure call, with SKSERVICE= SECURESERVICE_CONNECT_SW_INTERRUPT, originates from the normal kernel function VslConnectSwInterrupt. This leads, as usual, to the secure kernel handler which calls into IumpConnectSwInterrupt and from there to SkpgConnect, passing it all the data that was sent by the normal kernel.

KiConnectSwInterrupt is only called by one caller – an anonymous function in ntoskrnl.exe that has no name in the public symbols. This is an extremely large function that calls into other anonymous functions and has a lot of weird and seemingly unrelated functionality. This is one of the PatchGuard initialization routines, which does the “real” activation of HyperGuard, supplying the secure kernel with memory protection ranges and targets which I will discuss later when talking about SKPG extents.

I encourage you to follow the call stack yourselves and get a bit of insight into the mysteries of PatchGuard initialization, but if I start covering PatchGuard details this series will quickly become a book so I will skip the details here. Let’s just trust me when I say that this all also happens in the context of Phase 1 initialization and is the first point where HyperGuard is activated.

Once HyperGuard is fully activated, a global variable SkpgInitialized is set to TRUE. This variable is checked every time SkpgConnect is called, and if set the function will return immediately and not make any changes to any SKPG initialization data. This means that the two other activation paths that will be described here will only activate HyperGuard if PatchGuard is not running and will result in less thorough protection of the machine. If PatchGuard is active, then the other two activation paths will return without doing anything.

The second code path into VslConnectSwInterrupt goes through PsNotifyCoreDriversInitialized. This is also happening as part of Phase 1 initialization, but later than the PatchGuard path: 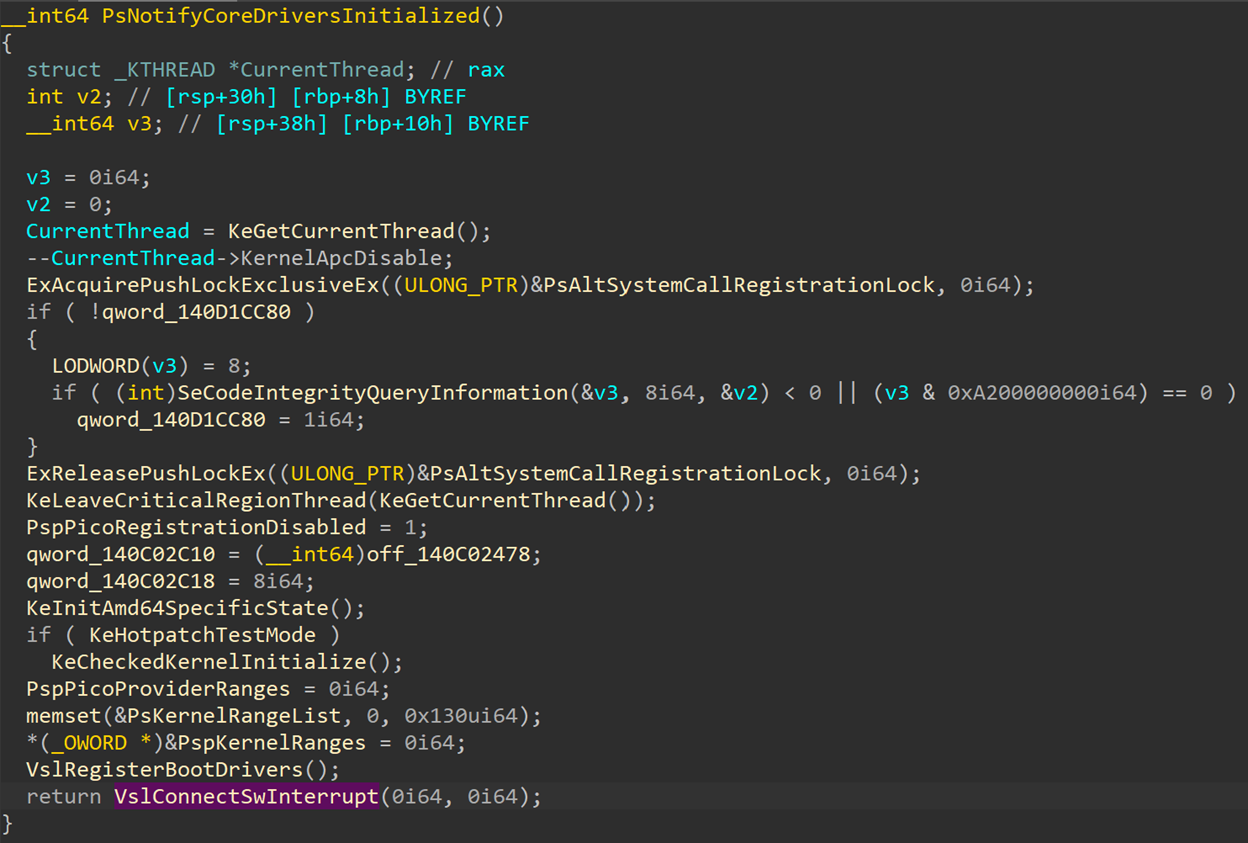 As we can see here, the call to VslConnectSwInterrupt is done with empty input variables, meaning no memory ranges or extra data is sent to HyperGuard and it will only use its basic functionality. If PatchGuard is running, then at this point SKPG should already be initialized and the call will return with no changes to SKPG, so this path is only needed if PatchGuard is not active.

The last case where HyperGuard is activated happens during Phase 3 initialization. This happens in response to a secure call with SKSERVICE=SECURESERVICE_REGISTER_SYSTEM_DLLS. It will also call into SkpgConnect with no input data, simply to initialize it if nothing else has already.

On the normal kernel side: In PspInitPhase3 the system checks the VslVsmEnabled global variable to learn whether Hyper-V is running and VSM is enabled. If it is, the system calls VslpEnterIumSecureMode – a common function to generate a secure call with a given service code and arguments packed into an MDL. The system enters secure mode with service code SECURESERVICE_REGISTER_SYSTEM_DLLS: 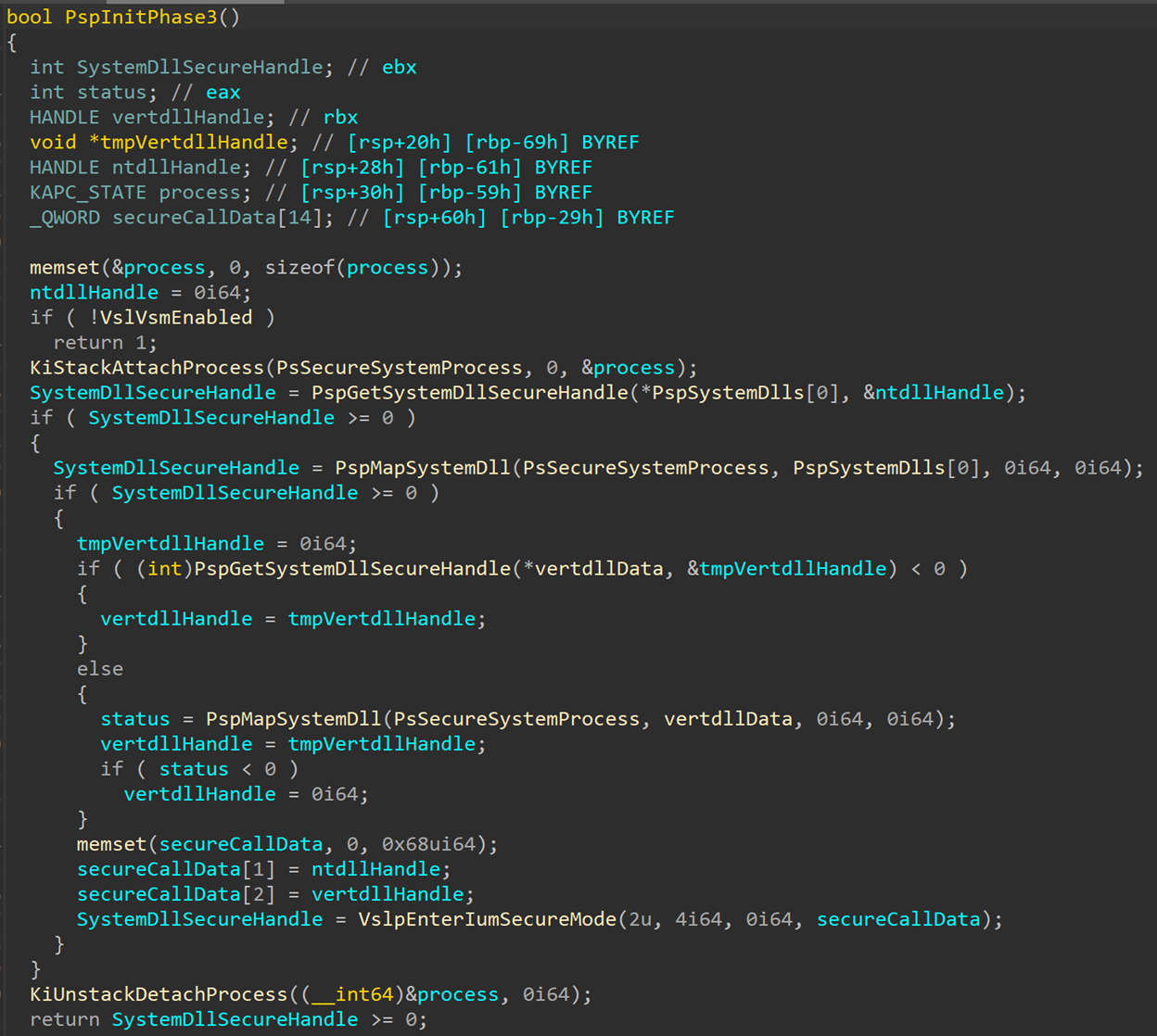 Once a secure call reaches the secure kernel it is handled by IumInvokeSecureService, which is pretty much just a big switch statement, calling the correct function or functions for each service code. In the case of code SECURESERVICE_REGISTER_SYSTEM_DLLS, it calls SkpgConnect and then uses the data passed in by the kernel to register system DLLs: 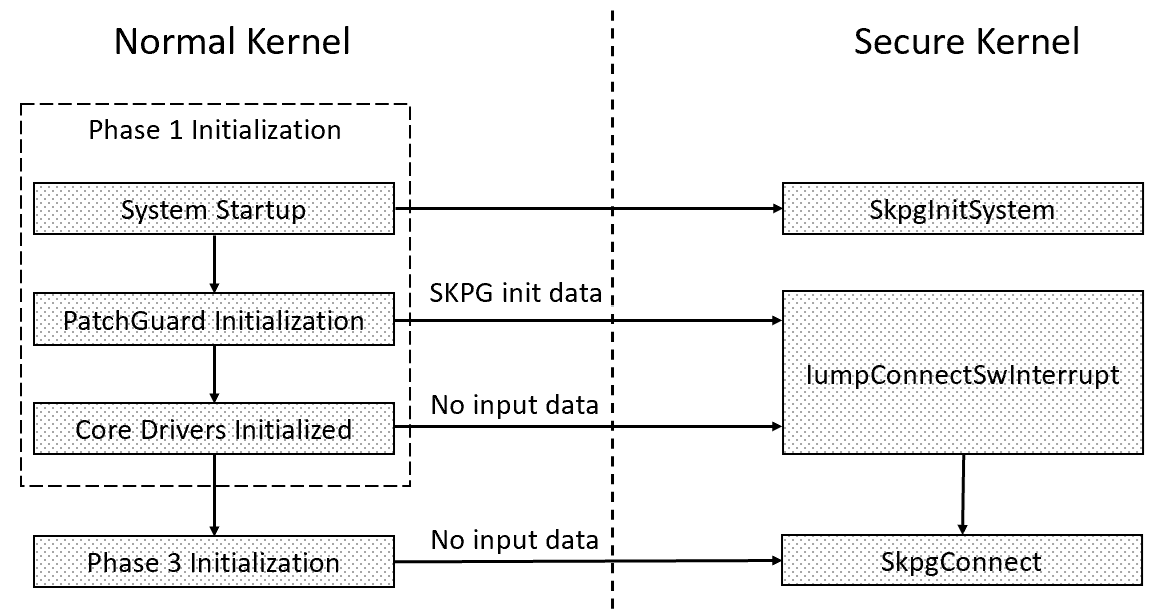 This is it for part 1 of this series. So far, we only covered the general idea of what HyperGuard is and its initialization paths. Next time we will dive into SkpgConnect to see what happens during SKPG activation and learn more about the types of data SKPG protects and how.