After getting the driver in Part 3 of our blog to load and adding a DbgPrintEx statement in our hook, we managed to get all the paths that were being opened without crashing the machine. We got really excited thinking we were done. But as soon as we clicked on the Start Menu, we noticed things had gone awry – it wasn’t starting up at all, and when we launched Process Monitor from SysInternals, we could see ShellExperienceHost.exe crashing. We tried other applications, which ran fine but still, the machine was pretty much unusable. So, we relaunched our IDA and WinDbg and went hunting for more bugs.

As we were playing around, we noticed that another process that wasn’t working was the new Windows Calculator. We then launched it in the debugger, taking advantage of the fact that the WinDbg Preview on the Microsoft Store can now easily launch Application Packages (which is needed, since Calc.exe is now simply a launcher for the real Calculator.exe — which essentially just does a ShellExecute of calculator://). Unfortunately, as soon as the debugger “attached”, the process had already died. This is usually a sign of a loader issue – such as an import library not being present, failing to load, or missing some required import.

A really useful way to debug such issues is to enable “Loader Snaps”, which is a Windows debugging feature that leverages “Global Flags”. These flags are set either in the kernel (nt!NtGlobalFlag — and recently, nt!NtGlobalFlag2) or in user-space, in the Process Environment Block (PEB) of every process, as Peb->NtGlobalFlag (or again, recently, Peb->NtGlobalFlag2 as well). You can enable system-wide global flags (either kernel or user ones) as well as per-process global flags through a handy utility that ships with the Windows Debugging Tools, unoriginally also called Global Flags (Gflags.exe). In the screenshot below, you can see how we enabled this debugging feature for Calculator.exe 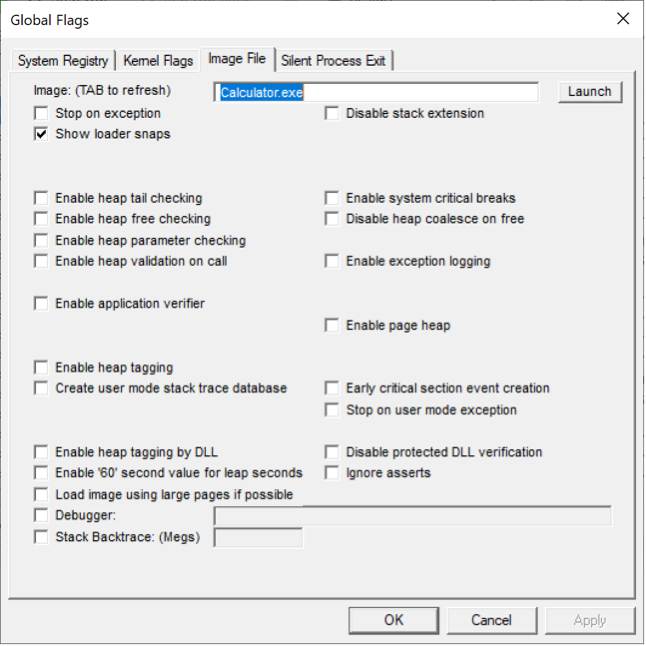 Loader snaps instruct the loader to print out short debugging messages (“snaps”) which trace all parts of the link-loading process: import resolution, DLL loading, manifest file parsing, SxS redirection, even down to calls of GetProcAddress. Our thought was to launch Calculator with snaps enabled, with and without our driver, and then do a simple diff between the two debugger outputs.

The first thing we noticed was that when running with our driver we get this interesting error, right as soon as the process starts:

This tells us that initializing the current application’s directory failed with error 0xC0000022, which is the NTSTATUS code for STATUS_ACCESS_DENIED. Normally, you’d expect an application to have access to its own local directory, so this was already unusual. We searched for this error in the rest of the log, and compared with the log of our run without our symbolic link hook:

The log shows that we see this error a few times, both when initializing the process, as well as when loading certain DLLs, whenever our driver is hooking the C: volume, but we don’t see it at all when running without our hook.

At first, we were also puzzled as to why only certain DLLs were failing to load – then we realized most of the libraries needed by Calculator are “known DLLs”. These is a special optimization Windows does wherein Smss.exe pre-maps these libraries at boot and caches their section objects in the \KnownDlls namespace of the Object Manager. The LoadLibrary API (more strictly speaking, its LdrLoadDll implementation in the loader) has special logic to always look for DLLs in this namespace first, and only try accessing the file system if it cannot find them there.

So, it seems like we found a hint to our problem, but what is the cause? We investigated Calculator’s token to try and notice anything that our hook might’ve affected, which could’ve led to this access denied error: 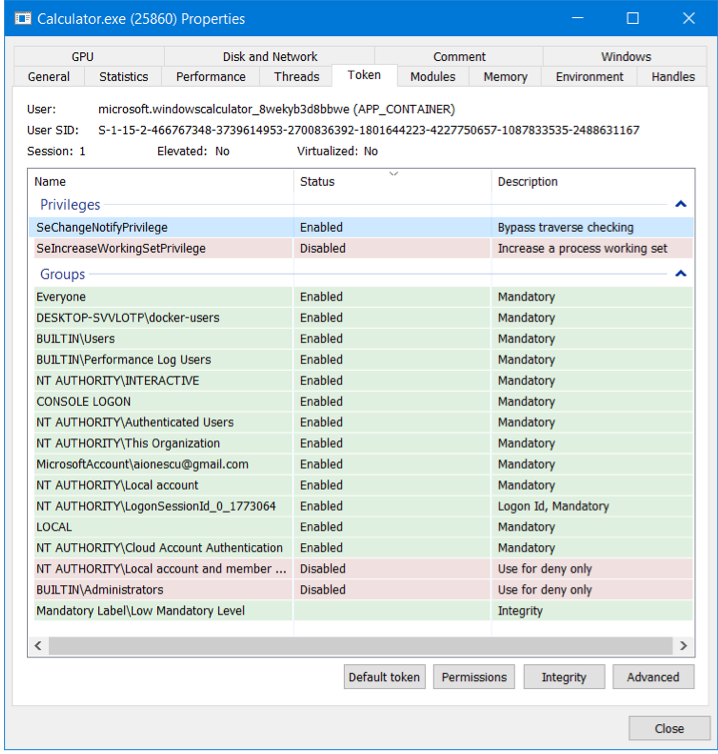 Although the token looked the same with, and without, our driver, we did notice something obvious in hindsight – this process is running under an app container (Windows 8’s new sandboxing technology) – as does the Start Menu, and each one of the other applications which were failing to execute! This made a lot of sense, as Microsoft is moving more and more applications into their new sandboxing model.

At first, we thought this would affect all Microsoft Store applications, but our assumption had been broken when WinDbg Preview launched fine. Now the reason made sense: it’s a “Centennial” App, meaning it’s a Windows Desktop Bridge UWP Application – and runs with full, regular privileges.

Well then, what’s special about an app container? Among many other security restrictions, the default “traverse” checks which are performed by the I/O Manager work a little differently. You see, one of the things most people don’t think about, is that to access a path such as c:\windows\system32\spool\drivers\colors\foo.dat, the Windows ACL-based security model technically dictates that “c:”, “windows”, “system32”, “spool”, “drivers”, and “colors” should all be opened one by one, and that the current application’s token should be validated for FILE_TRAVERSE access to the directory. This is not only expensive but would also fail for privileged paths which contain user-accessible locations (such as this very example).

To solve this, Windows, by default, grants all users (even Guests!) the SeChangeNotifyPrivilege, which is a strange name for the “bypass traverse checking” privilege. As the name suggests, this causes the I/O Manager to bypass these expensive, likely failing, checks, and directly skip to checking the ACL of only the underlying file being accessed. And since app containers do run with a regular user token, even they get this privilege, as shown in the token screenshot above.

However, this may not be the desired behaviour for other types of device objects – remember that the I/O manager doesn’t only gate access to partitions, but all sorts of other virtual devices too, such as \Device\Afd to bring up one example, which represents Sockets, or \Device\NamedPipe, which is used for their namesake. Within these devices, there are internal paths as well, such as \Device\NamedPipe\SomePipeName. Because app containers are meant to provide strong security boundaries, the I/O manager implements a function, IopDoFullTraverseCheck, which we show below, in order to enforce certain restrictions: 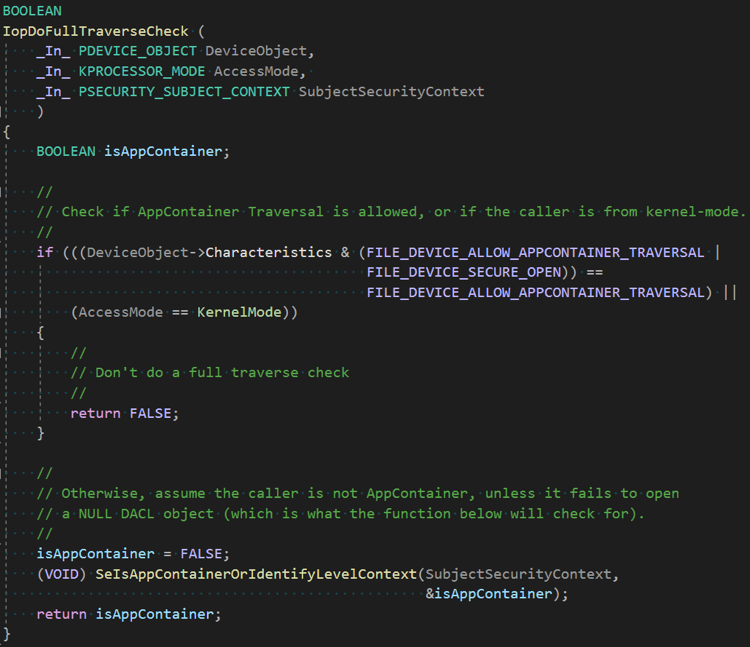 As you can see, for user-mode callers, a full traverse check will always be done for an app container unless the device object has the FILE_DEVICE_ALLOW_APPCONTAINER_TRAVERSAL flag set. This helper routine is called deep in the guts of IopParseDevice, a function which we already talked about in Part 3 of this blog series and which we had referenced the ReactOS source code for. Unfortunately, as app container-related logic is new to Windows 8, ReactOS can’t offer much help here, so we’ll have to go back to IDA. In the same if branch where the VolumeOpen checks are eventually done (which caused the crash in Part 2), we can now see some additional code, which we’ve reversed and shown below: 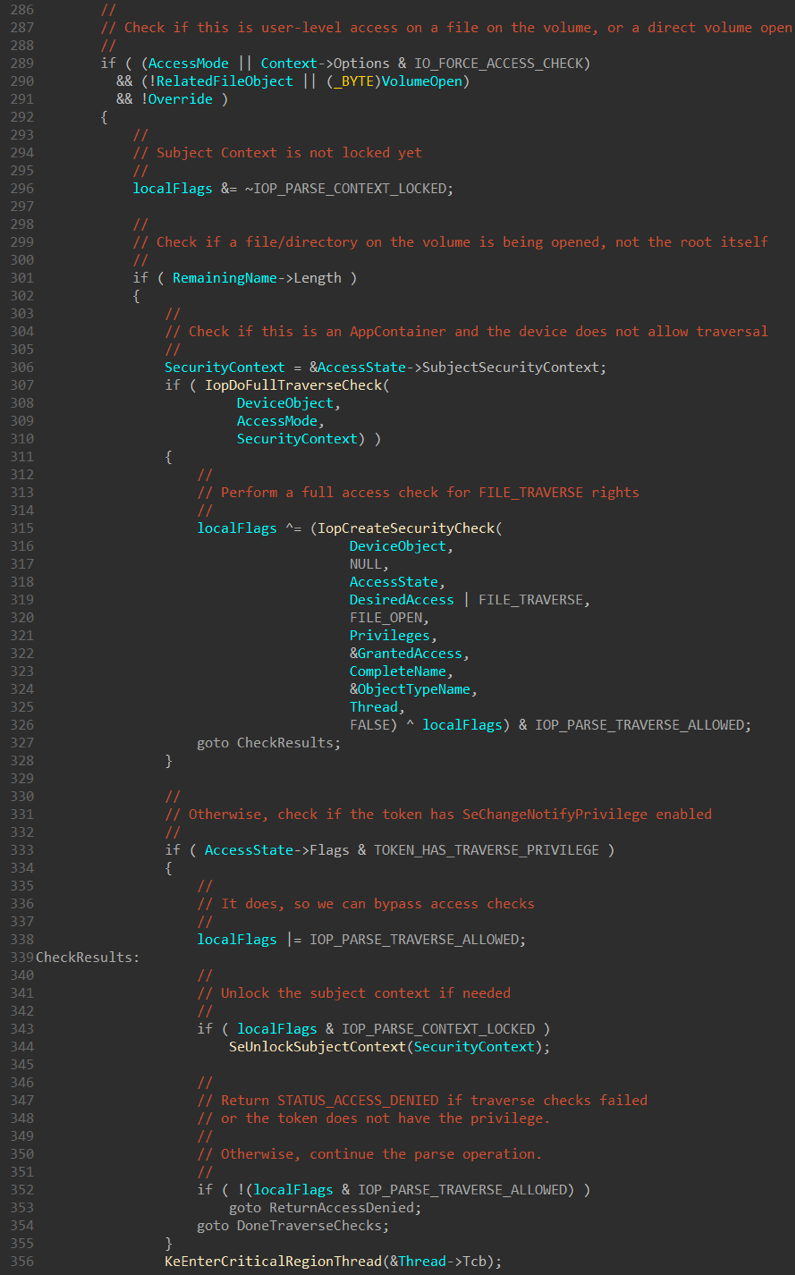 The check at line 307 is what calls the helper function shown earlier, which then results in a full SeAccessCheck being done by IopCreateSecurityCheck. As a side note, if you’d like to read some great research on these checks, and some of the abuses around bypassing them, James Forshaw has a great presentation at NullCon 2019 which you should read over.

In our case, this failed, because the ACL for \Device\HarddiskVolume0 does not give FILE_TRAVERSE to the Calculator Package SID (or the ALL_APPLICATION_PACKAGES SID). While we could certainly add this, it would amount to a hack – the correct fix, which is what \Device\HarddiskVolume3 itself has (our original partition device object), is to add the FILE_DEVICE_ALLOW_APPCONTAINER_TRAVERSAL flag when we call IoCreateDevice. Note the debugger output below that compares our device with the real device:

So, while you all had to read another six pages of ranting, the only line of code that we had to fix is our call to IoCreateDevice:

Well, there you have it! With this small fix, our hook driver now perfectly works on all the systems we’ve tested it on (about most of you, given the ATMFD RCE we’ve been using to deploy the driver). The final version is now posted on our GitHub here. Thanks a lot for reading!